Tesla received his last patent, U.S. Patent 1,655,114, in 1928 for his idea for a type of biplane that could take off vertically (a vertical take-off and landing or VTOL aircraft) and then be "gradually tilted through manipulation of the elevator devices" in flight until it was flying like a conventional plane.[125] Tesla stated it would weigh 800 pounds and would sell at $1,000 for both military and consumer uses.[citation needed] Although the aircraft was probably impractical it may be the earliest known design for what became the tiltrotor/tilt-wing concept as well as the earliest proposal for the use of turbine engines in rotor aircraft.[126]

In the late 1920s, Tesla befriended George Sylvester Viereck, an illustrious German poet and mystic. Though nearly a hermit, Tesla occasionally attended dinner parties held by Viereck and his wife. Tesla composed a poem for his friend — "Fragments of Olympian Gossip". It poked vitriolic fun at the scientific establishment of the day.[127] For example, he deridedAlbert Einstein for claiming that matter and force are transmutable (Mass–energy equivalence), even though Archimedesand Isaac Newton had stated that they are not.[128]

On Tesla's 75th birthday in 1931, Time magazine put him on its cover.[129] The cover caption "All the world's his power house" noted his contribution to electrical power generation. He received congratulatory letters from more than 70 pioneers in science and engineering, including Albert Einstein.[130] 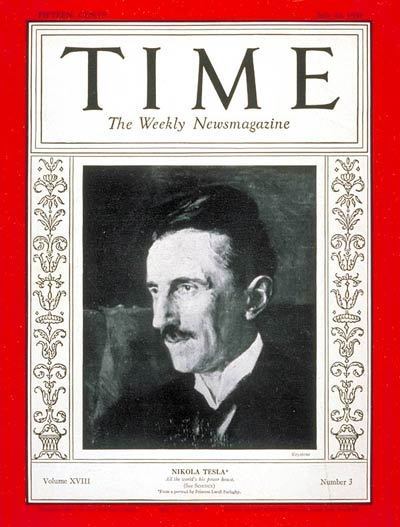 In 1934, Tesla wrote to consul Janković of his homeland.[citation needed] The letter contained a message of gratitude to Mihajlo Pupin who had initiated a donation scheme by which American companies could support Tesla.[citation needed] Tesla refused the assistance, choosing instead to live on a modest pension received from Yugoslavia, and to continue his research.[citation needed]

In 1936, replying to a birthday telegram from Vladko Maček, Tesla said he was "equally proud" of his "Serbian origin and Croatian homeland",[132] a phrase often paraphrased in conciliatory context at modern-day joint Croatian-Serbian Tesla celebrations.[133] In addition, in the same telegram, Tesla wrote "Long live all Yugoslavs."[134] When others tried to co-opt him into ethnic and other conflicts in Yugoslavia, Tesla once replied: "If your hate could be turned into electricity, it would light up the whole world."[132]